Do you know how the brain shapes social networks, or how social relationships form the state of the brain? Social networks are complicated network that publicize the object between the people. The brain consists of networks that processed the information and transfer through neural sections. Whereas the brain functions and the structure of the brain provides biological mechanisms for human behaviors, it suggests mediating social networks or extrinsic modulators for those behaviors. As one, they show fundamental contributions to the human experience. The integration of fundamental knowledge of psychology, social and evolutionary sociology can affect how individuals operate among groups and communities, due to recent advances in network neuroscience, provide new insights in both areas.

Almost most areas of cognitive function need to merge distributed neural activity. The analysis of the human brain connections network consistently identifies a set of regions that are important for enabling signaling and efficient nervous communication. The combination of the data from numerous empirical and computational studies shows that the poles of the brain play an important role in merging of information that form several aspects of complex cognitive function.

Brain imaging entails analysis of the amount of activity inside the brain during different tasks. This helps us connect the behavior and function of the brain to understand how information is processed. Different approaches have a different temporal and spatial resolution. The brain imaging is chiefly used in cognitive neuroscience.

The brain can be considered as a network: a connected system where nodes or units represent different regions and communications represent the paths of communication. From the functional point of view, connections are encoded with temporal dependence between activities of different parts of the brain.

Our social world structure is highly complex and consists of different interactive units. queries that relate to the understanding of topics like; how, when and why, these units require theories and methods that lead to a pattern of heterogeneity between interpersonal relationships. The science of the network provides the theories and methods that can accumulate the abundance of the connecting patterns, pointing to the local network nodes that affect overall performance and provide tools for intervention, leading to changes in the social network. These theories and methods integration with experimental studies provides a powerful tool to explore a set of principles that describe behavior in terms of network structure and function in different fields. For instance, there are interesting similarities between the patterns of correlation between individuals in a close family, members of a team, actors in the political insurgency, mixed global corporations and committed countries in an effort to support global diplomacy. Undoubtedly, the term “social network” is perhaps a bad term, which is a generic term for what is actually a collection of interactive networks at different levels of analysis that constitutes our social and cultural life structure.

By what method information and behaviors develop in networks from man to man?

As a basic example of showing and telling the idea that brain and social networks interact with each other and understanding such interaction is valuable, we consider the fact that ideas, emotions, and behaviors can be transmitted through man to man in online and offline social networks. What are the biological mechanisms for these phenomena? Social scientists consider that belonging and systematization are crucial to human survival; being part of a group has many benefits, including: The ability to protect from criminal and their elements, and learning desired behaviors from others, thus ensuring the preservation and possibility of resources and safety. At the same time and with a connection, neuroscientists have identified a range of brain systems that are associated with communication and decision making. The question, however, is how ideas and attitudes between brains have spread through social networks. There are significant and unanswered questions about how to develop ideas and behaviors advance that can be resolved by modeling the brain and social networks within a multiscale network framework (Figure 1). 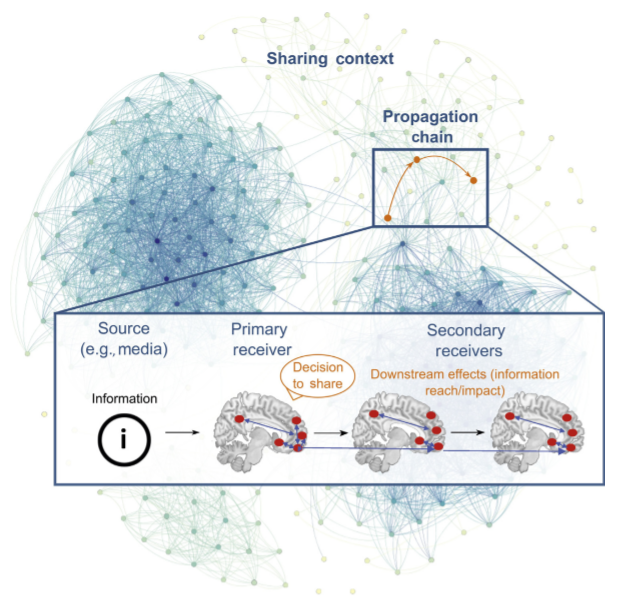 Figure 1. The multiscale network nature of the spread of behavior and ideas. Behaviors and ideas advance from broadcasting and from man to man via brain networks within social networks. A diffusion chain between three people within this social network starts with the man who is the source of the information, the person who is connected to the main target, the person who may decide to share the information with the secondary target.

The key role of integrated and communicative processes

Afterward the beginning of modernized neuroscience, the brain has generally been seen as a distinct anatomical separate organ, with some of its various parts associated with the expression of specific mental faculties, behavioral traits, or cognitive functions. The theory that the brain regions of the individual have specialized function and generate a special contribution to the mind and cognition is supported by much evidence and by both anatomical and physiological studies as well as noninvasive neuroimaging. These studies are particularly and explicitly documented by well-regulated cellular, orbital, and neural responses in many areas of the human brain, counting the analytical cortex. Specialized function has become one of the foundations of a stable cognitive neuroscience theory.

The info on the association between elements, for example, the connections between brain regions, can be summarized and presented as a set of nodes and edges that constitutes a network (Figure 2a). The manufacture of brain networks establishes by collecting observable data on how brain regions, neural populations, or neurons connect. The main distinction is within structural and functional networks. Constructural networks are related to a pattern of anatomical connections, which are synaptic connections within neurons or prolongation in brain regions. The most related studies of the human brain are the extensive networks of interconnected pathways that bind the important brown areas of subcortical and membrane, which collectively form the human connectome (how neurons connect at different levels). In opposition, functional networks are collected through the evaluation of the statistical dependencies between regional or neuronal time series data. Despite the fact, there are many measurements of practical connectivity exist, nowadays, most human imaging studies show a Pearson cross-correlation between hemodynamic or electrophysiological time periods. Dissimilar to large - scale Constructural networks (which are supposed to be stable in the shorter time from seconds to minute), functional networks are highly changeable, displaying dynamic changes that automatically occur during rest period, as well as certain changes in different working conditions.

Figure 2. Illustrative sketch of a brain network present basic terms. (a) Networks be made up of nodes and edges. The node degree is related to the number of edges connected to each node. (b) Networks can be broken down into communities or modules. Each of connections (edges) are linking nodes in the modules or bounded by modules. The highly connected nodes are the hubs, or are mainly connected to other nodes in the same society (provincial hub) or with nodes belonging to different societies (connector hub).

attempts intended to considerate and unify social network and studies of brain dynamics, have accelerated the understanding of basic psychological principles and helps to satisfy the underlying principles of the community framework. Nonetheless, even beyond foundation knowledge, work on this axis has the potential to improve actual surgery in clinical therapies for psychological and physical disorders, predict behavior change in response to persuasive messages and improve academic outcomes, including learning and creativity. For instance, if people whose brain or social networks respond differently to treatment, the entered information (including social media) can help provide appropriate interventions. Then as well, academic environments can be created in which groups of students work collectively in different social networks to boost individual learning capability. Undoubtedly, enhanced knowledge in these areas can also help to build optimal teams for team learning as well as assignment performance in education, large companies, medical, defense or other areas. These facilities derive cooperative coalition between scientists of social science, neuroscientists, and network scientists in construction and the fine-tuning of laboratory experiments, real-world studies, computational infrastructure, and basic mathematical theories, which it ties the break down between the brain and social groups by drawing two layers as basically interconnected levels in a multiscale network.

Deisseroth, K. (2016). Form Meets Function in the Brain: Observing the Activity and Structure of Specific Neural Connections. Micro-, Meso- and Macro-Connectomics of the Brain, pp.19-29.

Burkhalter, A. (2016). The Network for Intracortical Communication in Mouse Visual Cortex. Micro-, Meso- and Macro-Connectomics of the Brain, pp.31-43.